Disclaimer: The information presented does not constitute financial, investment, trading, or other types of advice and is solely the writer’s opinion.

The internet was taken by storm by the chatbot ChatGPT in December 2022. The technology is relatively new and available to the general public and has convinced many users it is more than just a fad.

The bot can be used to write poems, make jokes, and write cover letters, and has even been prevalently used in academia. So much so that ChatGPT got banned from New York City’s public school devices as it could inspire cheating.

While many of these subjects have already been discussed online, we asked ourselves, are there any other ways that ChatGPT can lend its expertise?

Why not apply the bot to price analysis? For starters, the bot can not access live data nor can it perform web searches. Unfortunately, ChatGPT is not the place to go when we want to get price predictions for a coin like Shiba Inu.

The bot is also extremely stubborn- it adamantly refuses to even take a stab at predicting what the price of any crypto asset could be in the future. All the while it does a great job of reminding the user to do their own research before investing and to carefully manage the risks taken.

Yes, ChatGPT is not a finance expert nor a trading guru, but it can churn out code. Technical analysis on TradingView uses the Pine Script language, something ChatGPT can employ and provide snippets of code for. So we asked the bot to write a code to determine if an asset is in an uptrend or downtrend. Simple, right?

Unfortunately, we were unable to compile the code on TradingView. However, that didn’t mean we couldn’t use ChatGPT’s suggestions on strategies and modify them. We asked the bot for a simple intraday trading strategy based on Stochastic RSI, RSI, and simple moving averages. 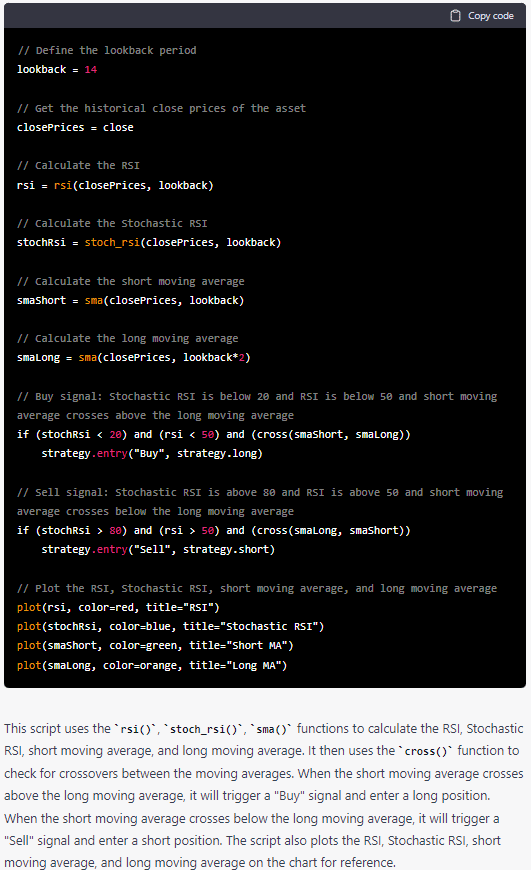 A basic strategy, with the short SMA being 14 periods and the long one being 28 periods. How effective is it? Before we find out, it is important to note that this strategy does not give any rules for setting stop-losses, and the take-profit is dependent on the Stochastic RSI having a crossover opposite to the one used to enter.

Using TradingView built indicators and for these specified periods, let’s see if ChatGPT can generate any returns on the 15-minute chart of Bitcoin. 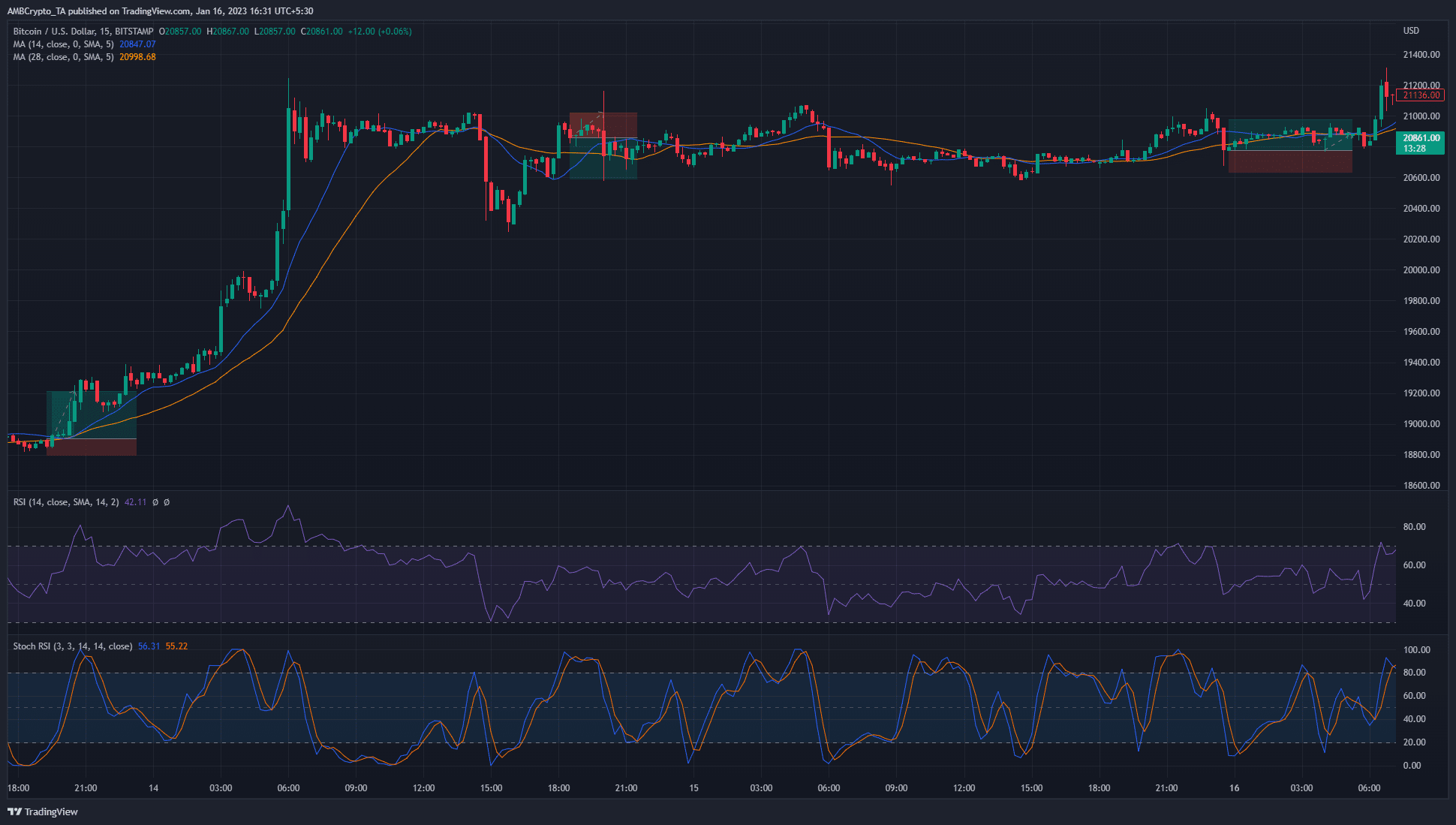 Above, we can see that three trades matched all the entry criteria- moving average and stochastic crossover and the RSI is above or below 50 for going long or short respectively. This was indicative of a mean reversion strategy, but momentum-following traders can use RSI>50 as a basis for going long, and RSI<50 to look for shorts.

The trades taken had one success, one failure, and one trade with an R: R of 1.42. Together they achieved a +2.64 RR over three trades- but to effectively backtest, three trades isn’t enough of a sample size as closer to three hundred would be necessary.

Therefore we can see that a large part of filtering and generating signals comes down to us, the user. A user can tweak and fiddle with the code ChatGPT provides, and pester it to use different indicators, to see if better results can be achieved.

Let us try to use the Supertrend indicator and the RSI to generate buy and sell signals, with the Stochastic RSI to give relatively more favorable entries. This is a momentum-following idea, and we can use the findings for Shiba Inu to see if some results are generated. 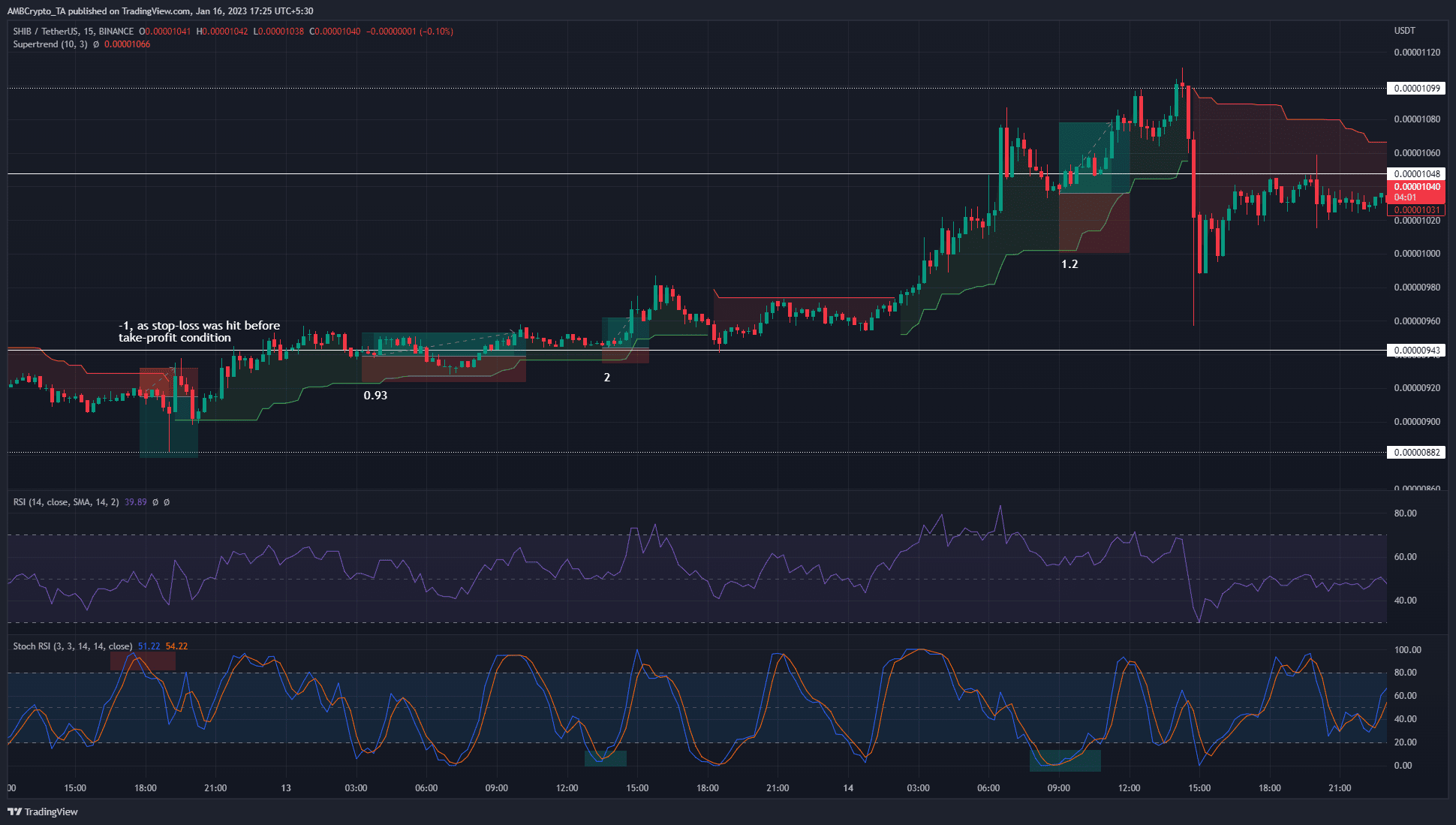 Entry conditions are explained by the bot, and we modified the stop-loss and take-profit conditions. Stop-loss is at the Supertrend at entry time, invalidation being a flip of the Supertrend.

Meanwhile, take-profit is the next Stochastic crossover in opposite conditions to entry (above 80 crossovers in the case entry is below 20 crossovers, for example). We find the 15-minute chart gave four trades from December 12 to 15, with +3.13R. Some suboptimal trades, such as the +0.93R, were also suggested.

Once again it must be stressed that the sample space for this strategy was tiny. The point is not the efficacy of the strategy, but the fact that the trader and bot can work together to find solutions in an attempt to beat the market.

When enquired about the suboptimal entries, ChatGPT replied that technical analysis concepts like trendlines, Fibonacci retracement levels, candlestick patterns, and price action setups such as inside bars can be used to give better entries. 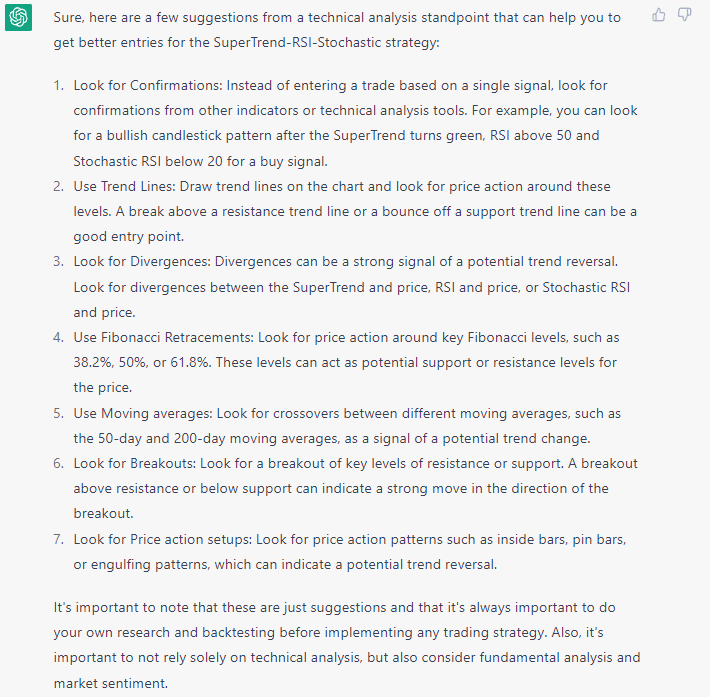 Dozens and dozens of indicators can be used on TradingView. Free accounts can only use two indicators at a time. That need not stop the intrepid student of the market. Volume indicators such as OBV, A/D, and CMF can be employed. The ADX indicator can add confirmation to moving average crossovers. Or, fair value gaps/inefficiencies at important Fibonacci retracement levels like 61.8% or 78.6% can be used to follow the trend.

The possibilities are endless, and one can use ChatGPT to refine their ideas. Go out there and have fun! But before that, we must answer a question ChatGPT did not. Where exactly is Shiba Inu headed? To the moon? 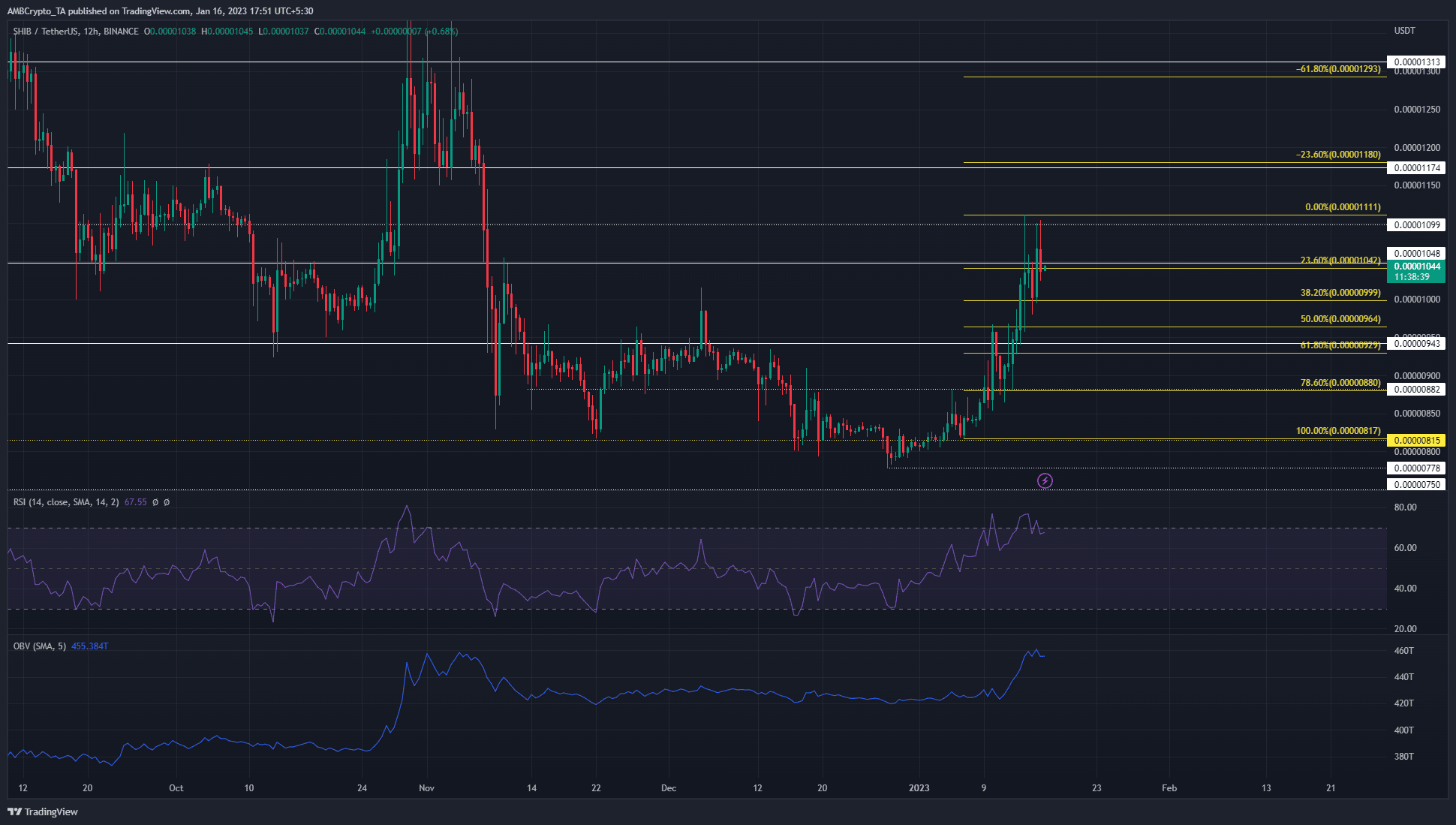 The rally from $0.00000817 was used as a swing low to plot a set of Fibonacci retracement levels. These levels have been respected by the price, which suggested that the northward resistance levels might also be respected. This meant bulls can look to take profit at the 23.6% extension level. This level has some confluence with the horizontal level of significance at $0.000013.

Is your portfolio green? Check the Shiba Inu Profit Calculator

At the time of writing, SHIB fought hard to climb past the $0.000011 area of resistance. This level was a strong zone of support in early October. Moreover, the rally later that month also saw a reaction in this area.